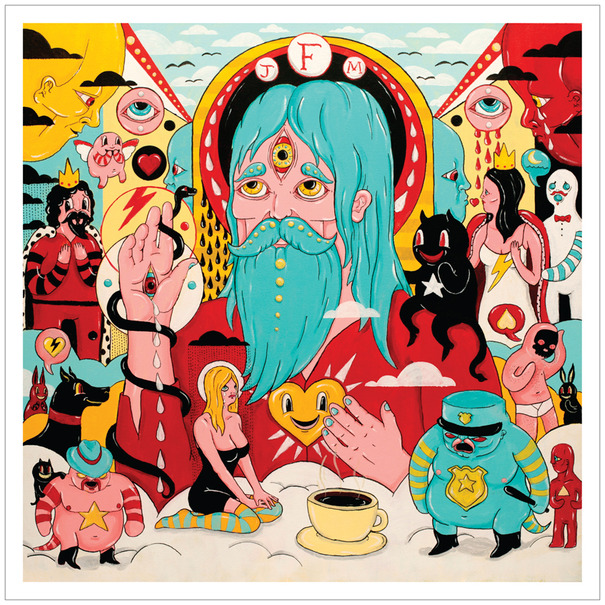 Father John Misty is Josh Tillman, former drummer for Fleet Foxes, and for the heightened level of likeminded approach to his previous band mates displayed here, Tillman could be pegged as a blood relative. But he confidently establishes himself here, and with a debut album as Father John Misty (he's also released several albums as J. Tillman) that's every bit a match for the brightest moments of Fleet Foxes' latest release, it's obvious that Tillman couldn't have kept his light hidden under the proverbial bushel much longer with that band.

Tillman's Father John Misty is frank and funny, living his life like it's a vehicle he's trying hard to ride the wheels off of, though there are also moments of clarity where he's intent on keeping those wheels out of the ditch. One of the album's strongest tracks, "Hollywood Forever Cemetery Sings," is its edgiest musically. Over a big beat and slashing guitar, Tillman sets an amusingly enigmatic scene: "Jesus Christ, girl/What are people gonna think/When I show up to one of several funerals/I've attended for Grandpa this week with you?" before repeating the plea "Someone's gotta help me dig."
"I'm Writing A Novel" is one of a few songs that sound like a direct descendant of Mike Nesmith's post-Monkees country rock; it's a rollicking romp that details the kind of drug-haze experience that's probably best forgotten. Working with producer Jonathan Wilson, Tillman's echoes of Harry Nilsson's easy pop are lushly explored on "Nancy From Now On."

It's clear from the start with the gorgeous opener, "Funtimes in Babylon," that Tillman's is a singular talent, and, thankfully, one that won't require much encouragement: "Look out Hollywood, here I come."