29. The Boats - Ballads of the Darkroom (Our Small Ideas) 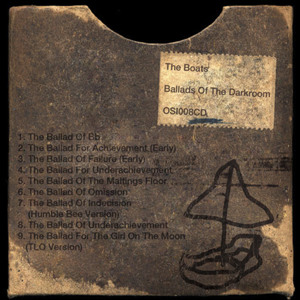 Previously only available on tour, 'Ballads Of The Darkroom' finally finds its way to the shop floor on The Boats' Our Small Ideas imprint. The core trio of Andrew Hargreaves, Craig Tattersall and Danny Norbury recorded and mixed the material between 2009-2012, roughly the same period as their 'Ballads Of The Research Department' and 'The Ballad Of The Eagle', and it's blessed with the same humble blend of neo-classical beauty and sad-ghost-in-the-machine melancholy. Again they're joined by regular shadow member Chris Stewart for one track 'The Ballad Of Failure', a seductively modest distillation of Farben-like house patterns, fragile vox and tenderised strings, and by aus for the ferric blur of 'The Ballad Of Omission' (Craig's really going for it with the fuzz button, kids), plus the dreamy lilt of their Japanese counterpart Cuushe on Humble Bee's version of 'The Ballad Of Indecision', while the other six tracks are given to equally gorgeous instrumental miniatures such as the crystalline 'Ballad Of Underachievement', or windswept longform compositions such as 'The Ballad For The Girl On The Moon (TLO Version)'.