In Sectionals we spotlight music we find interesting that casual browsers might overlook or be unfamiliar with. Consider these our recommendations to make your life more diversely musical. 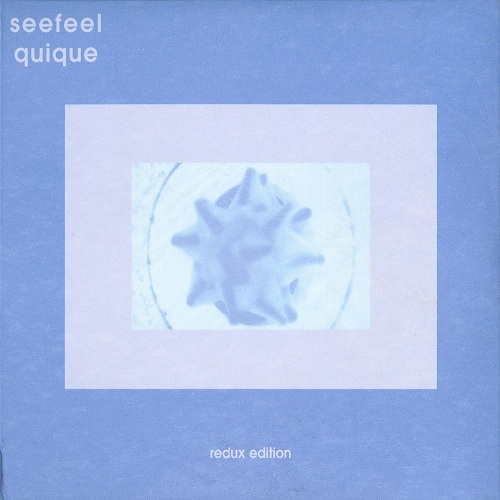 Being an early 1990s shoegaze band whose big claim to fame is that they "went electronic," it's impossible to talk about Seefeel without also talking about technology. On Seefeel's MySpace page, there's live footage of "Industrious"-- from their 1993 album Quique-- at a Russian festival in '94. The band doesn't quite stand still; bassist Darren Seymour does some kind of spastic dance during the bridge. But something about the basic immobility of the band-- attempting to recreate its pulsing, programmed loops live on stage, a music that pours My Bloody Valentine's oozing pink and purple plasma onto techno's chrome skeleton-- is tied to a long-gone age of implacable MIDI-sequencing, lacking the real-time software flux available to Christian Fennesz or the freedom of movement enjoyed by modern cyborg bands like Battles.
But only a maniac would claim that Kraftwerk's neon lights shine any less brightly because they didn't have Ableton Live, and Seefeel's music continues to sparkle 14 years later, an entire generation having built an ambient-motorik noise-pop aesthetic around Quique songs like "Plainsong". Too Pure finally brings the album back into print after far too long with this double-disc "Redux Edition", and listening now, you'll hear the beginnings of a still-thriving genre that remains slippery and unnamed, purely electronic music with a strange, tangy rock aftertaste-- think Tim Hecker's own post-shoegaze explorations into ultra-violet noise, Nathan Fake's plastic techno My Bloody Valentine homages, M83's heavily sequenced Vangeliscapes, a good chunk of the Darla Records catalog, and the twinkling textures of Mouse on Mars, who sent Too Pure a mash note with their demo after they had become infatuated with Quique. Even starting out in a genre where texture and noise already did much of the heavy lifting, the "rock band" version of Seefeel was just a shadow on the studio wall by the time of Quique, making it kind of proto-IDM before the genre even really had a name.
And in this rock-free space, the eight minutes of opener "Climatic Phase No. 3" actually sound like "Comedown Phase No. 3". It's just the barest tinkling of percussion, a rising and falling bass line to provide a barely audible pulse guiding the track, and the laziest melody Kevin Shields or Robin Guthrie never wrote. Not afraid to name a song "Spangle", that most overused of adjectives when it comes to post-Cocteau Twins' guitar atmospherics, Seefeel's canvas on Quique was the azure 8-bit horizon of a computer game where the band blew pixilated clouds that spritzed digital mist and crafted minimal hooks from just hypnotic smears of faraway feedback and Sarah Peacock's nape-of-your-neck intimate whispers.
Needless to say, if Seefeel's pace gets to, say, mid-tempo, the band's pretty damn worked up. The songs stretch out like groggy limbs after a mid-day nap, and the band is often at its best when it's at its most languid, as on the impossibly sensual and nearly static "Filter Dub". The underrated, understated rhythm work--rarely brought up when critics like me start talking alliterative nonsense about vapor trails and guitar swooshes--scrapes and pulses more than it pounds or strides, often recalling a stiff Kraftwerkian metal-on-metal version of polyrhythmic sway of Polynesian percussion. The silvery splash of the cymbals on "Industrious" is just another harmonic color in the palette; the chittering "Through You" sounds like gamelan recast with Atari-era tools.
In the band's attempt escape rock's orbit, the second disc of nine unreleased tracks and rare cuts melts any remaining physicality away until all that's left is, as the band titles the last track, a "Silent Pool", even removing most of the "techno" from "ambient techno." The "avant garde" mix of "Charlotte's Mouth" mutes the original's percussion until it's the spectral, washed-out blur of an underdeveloped Polaroid, and the eerie "My Super 20" blows barren winds as cold the bleakest tracks on AFX's Selected Ambient Works II or the arctic static of Thomas Koner. Moving to labels like Warp and Rephlex and exploring a more purely electronic sound--guitarist Mark Clifford went on to a long and fruitful techno career as Disjecta and other pseudonyms--was perhaps Seefeel's only option as they forced a rock/techno fusion that the technology of the time couldn't quite accommodate. But while it would have undoubtedly been interesting to see where the band might have gone in the anything-goes laptop age, Quique still sounds timeless.

We have a 2CD digipack copy of this excellent album for $9.99 in Electronic/Experimental section.