From the racks #7: Giant Sand 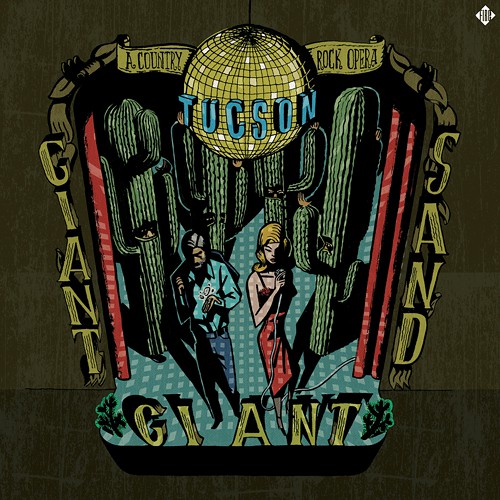 Giant Sand is a band started in the early 80s by Arizonian Howe Gelb.  In it's heyday the band also featured members John Convertino and Joey Burns who later split off to form Calexico. The band has always featured a drifting desert vibe combined with a broke down punk heart and a bit of psychedelic spirit keeping things weird.  This 2012 album features a much expanded line up, thus the extra "Giant," here reviewed by Allmusic:

A careful look at the cover of the album Tucson reveals that Howe Gelb has credited his band as "Giant Giant Sand," and with the lineup expanded to 12 musicians (and another five cited as guests along with a children's chorus), it's clear Gelb wasn't afraid to think big for this project. And the scale of the ensemble suits the material; Tucson is subtitled "A Country Rock Opera," and with the 19 songs clocking in at just under 70 minutes, it certainly has an operatic scope and an impressive musical heft. In addition to a lyric sheet, Tucson includes a 20-page booklet that attempts to explain the story that ties Gelb's songs together; while the tale is full of atmosphere and telling details, the narrative is murky at best, having something to do with a drifter who frees himself from his possessions, falls in love with a woman he meets at a dancehall, and ends up in an Occupy Tucson encampment with the city's disenfranchised. If Tucson doesn't scan especially well as a story, Gelb's music connects beautifully; shifting between twangy laments, dusty desert rock & roll, stripped-down blues, confessional ballads, and lusty border-town dance rhythms, Tucson conjures up a big and very colorful world in its 19 tunes, and while Gelb's craggy but expressive voice rings through most of these songs, in true operatic form he lets others' characters take the lead from time to time, and Lonna Kelley, Brian Lopez, and Gabriel Sullivan make the most of the spots here, enhancing the changing moods and flavors of this album. Recorded at studios in four different countries, Tucson is a widescreen epic by the frequently shambolic standards of Giant Sand's work, and the effort pays off -- this is an absorbing and engaging album that shows Howe Gelb's vision to its best advantage.

Various auction sites list this record for a wide variety of prices between $30-40... we have a Very Good (our top rating) vinyl copy currently priced at $17.99 in the racks.