BACK TO BACK CATALOGUE #1 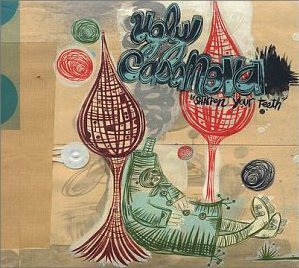 Isaac Brock of Modest Mouse was hired by the Sub Pop label to seek and sign artists he thought showed merit. His taste has turned out to be pretty good, bringing Wolf Parade onboard. Around the same time, after releasing The Moon and Antarctica on a major label, Brock trawled the Sub Pop bullpen and assembled an allstar/no-star roster to record an album under the UC alter-ego. From Holopaw he grabbed John Orth who provides lyrics and vocals to a few tracks. From Red Red Meat/Califone he snatched Tim Rutili for guitars/lyrics/vocals and Brian Deck for drums/percussion and co-producing. Rounding things out on a couple of tracks is Three Mile Pilot/Black Heart Procession’s Pall Jenkins providing vocals/guitars/keyboards. Two things are interesting about the album: one is that you can hear elements from all the individual bands in the overall mix… therefore not just a mouse jr. album. Secondly is how much the sound fed into Good News for People Who Love Bad News, Brock’s most recent Modest Mouse release. It’s got all the abstract minimalist swagger that you’d expect, but Orth’s vocals have a yang effect on Brock’s yin, balancing things out. Deck and Rutili long ago perfected the sound of a machine programmed to play 70s Rolling Stones that’s started to fall apart in interesting ways. The alchemy just simmers throughout, brewing up gold and IPA out of whatever base metals were on hand.

A couple of streaming audio samples can be found here.
Posted by e. at 8:02 PM