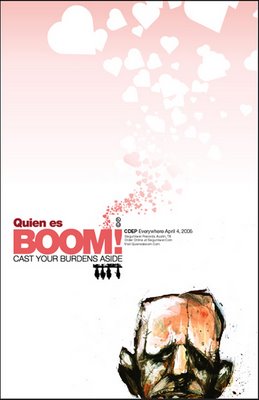 Here's a mild bitterness: it gets harder and harder to decide what to order in for the store. Each week, or every other week, I try to research the most interesting/least hyperbole laden press blurbs for new releases. The WWW being what it is usually features at least a few sound samples of even the most obscure release coming down the pike. Plus everyone and their dog and their dog's fleas has a MySpace page at this point in history (except for us 'coz we're too scabby). Anyhow, I hear great tracks all the time and think, "would someone buy this?" Which really means, "would someone who hasn't spent 20 hours this week on the internet care about this little band from Little Rock?" Or something to that effect.

So, in an effort to assuage my feeling of poking around in the figurative darkness and coming out empty handed I thought I'd take a page from some of the better .mp3 blogs and provide tracks and/or links for some of the more interesting things I pull from the inky depths.

First this month is a five piece from Austin, Texas going by the name Quien'es BOOM! They have a 7 song e.p. just out on Sixgunlover records. Here are links to a couple of the tracks: