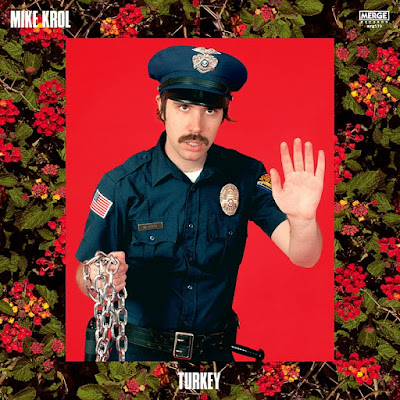 For August's (slightly late) Vinyl of the Month we return to Merge records for another instant classic of buzzy psychedelic pop. Here's what the label has to say about Mike Krol's  first full length for them after a couple of swell 10" e.p.s:

In bowling’s hallowed alleys, a strike is the minor miracle of all ten pins falling at once. Back-to-back strikes make a double. Do it a third time and you’ve got yourself a turkey.


History will decide which sports metaphor to apply to Mike Krol’s first two records, I Hate Jazz (2011) and Trust Fund (2013). But as needle meets groove on Turkey—Krol’s first record for Merge—there is no ambiguity. A shiny black ball tumbles past the suburban strip malls of a polyestered Wisconsin and veers precariously close to an East Coast gutter before gathering momentum in a physics-defying sprint for the Pacific. California is where the headpin falls—the right velocity, the perfect geometry, the bowler’s intent beautifully realized in a noisy moment of awesome destruction.


Mike Krol got his bike stolen and his heart broken. He bailed on graphic-design-as-career. He kept playing drums and guitars, and he kept writing songs about the stuff he hated and the stuff he loved. Leaving Milwaukee for Los Angeles, he took a few years’ worth of wrong turns. But when he showed up at a studio in Sacramento in March 2014, he had his affairs in order. Plug the vocal mic into a guitar amp. Plug the guitar into an overheating box of vacuum tubes. Put the computer in the closet. Roll the tape.