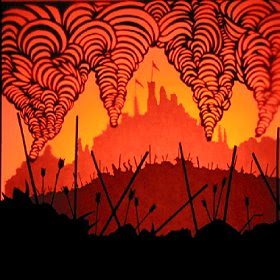 
I've been on a mini Brian Ramirez kick lately: the fantastic Universal Indians "Monster Approach" LP and this year's Poor School "Voor Niets in Zijn" disc. Why not top it all off with the new Ex-Cocaine record, brought to the world by a label called Siltbreeze. Whole lotta morra Ramirez acion in the pipeline - a quick view of the Killertree website sees Plants, Ramirez/Pete Nolan, Ex-Cocaine/Yellow Swans and Poor School/Swords & Sandels epherma en route. What a time to be alive in '85.

If you somehow managed to miss out on Ex-Cocaine till now, here's a quick rundown: Brian Ramirez and Michael Casler are the duo behind the name and both utilize vocals, guitars, and percussion to stir up "plundering stoner folk jams" though they've been branching out from that a bit in recent days. Really, this was all documented on the "Keep America Mellow" LP, a Heavy Tapes release, and the just-out GHQ/Ex-Cocaine split 7", so you've not no excuse not to be knowing at this juncture. Despite being all new (to my knowledge) material, "Esta Guerra" is a pretty good overview of the ground they've dragged their feet over since they were birthed while offering up some new surprisings hinting at still more radness to come. Three pretty diverse songs occupy the first side of the record. The first, "The Warning", is similar to their side of the GHQ split - totally inept free-percussion sledging, beaten out by hand and stix in lo-fi, basement-tech glory, Bennink and Graves by way of Black Flag, blood is singing, you know. "Sun Before Arises" treads the turf of "America" w/ a woozy, discordant psych/folk wash, gorgeously rendered in sun-stained early morning laziness with the title being chanted in rather charming fashion - slots in fine alongside your Golden Calves Money Band, your Davenport, your Tower Recordings, etc., but with a bent that's all Ex-Cocaine and no one but. "The Tempest", finally, is a scowling square-off between Ramirez and Casler, one on guitar and the other on bass, sending out all kinds of mangled riffs in gnarled, barbed patches. At times they sorta congeal into shaky rhythms, but they collapse into sludgy compost just as quickly a la Gate.


The second side features a short piece ("The Sheafman") and a longer one ("With the With the When the One"). Both deal in sub-angelic guitar riffing, bruised harmonies, and wasted vocals - "The Sheafman" is a guitar-led sermon bolstered by tabla-style percussion while "With the..." is a colossal excursion in 60's psych riff carvings and 80's Xpressway/Shock junk rock moves, thick and hazy Rallizes vibes all over this one, albeit slower, methodic, and more fucked up. It embodies pretty well the general Ex-Cocaine ethos of lying out in the sun stoned out of your head with sweat and beer leaking out of every pore - sun blindness music indeed.

Overall - overall! - it's all pretty great slosh rock fro a couple of undisputed champeens though I think I still prefer the "America" LP. Hardly a fair comparison since "America"'s had plenty of time to settle and this one's the new kid that I have to spend more time with before I Really Get to Know It but shit, you can't go wrong with any of the Ramirez/Killertree filth in my book. Get to scopin'.


Various auction sites list this record for a wide variety of prices between $5-20... we have a Very Good vinyl copy currently priced at $11.99 in the racks.
Posted by e. at 5:33 PM