So you wanna be a rock and roll star... 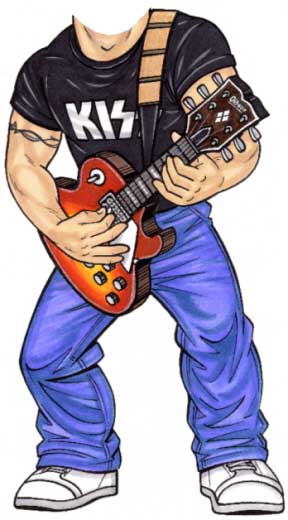 Backstreet is now just that much lighter. We've just completed our newest round of consignment house cleaning:  a process that involves going through the unsold under-the-shelf items that local and touring bands have entrusted to us, counting them, then e-mailing the previously mentioned bands to tell them nothing has sold and asking them what we should do with them now.  There are more than a hundred CDs in "giveaway" piles out in the hall.

It's not impossible to make, market and sell your own music in this post-space-age society. At least the "making" part is actually a little too easy, given the relative affordability and simplicity of most digital recording software that many aspiring artists have on their home computers.  It's the other steps, post making, mastering and packaging, where either a better plan or slightly less lofty expectations are key.  Here are a few hints, tips and suggestions to help you avoid pitfalls.

(1) Do you need a CD/vinyl/cassette in the first place?

You've been a band for a few months... you've played three or four shows at art galleries, regional showcases, maybe opened for a touring band at a local bar.  You have a MySpace page that gets a couple dozen hits a week.  You know someone who's a photographer or graphic designer who has been making your posters, so pretty packaging is no problem.  There are three possibilities here: (a) NO.  No, you don't need anything to sell until you start getting regular shows in more than two venues in one city.  (b)  OK, yes... you could use something to sell at the next craft sale you're providing background music for... so burn off a few CD-Rs from the best songs in your iTunes playlist, get your graphic design friend to make a pretty-but-cheap sleeve to tuck them in and either give them away or sell them for a couple of bucks to people browsing the felting projects.  (c) YES..., of course.  In fact you need to shell out for three days in a studio, a professional mastering job, full press run of 1000 non-CD-R copies shrink wrapped with the artwork you commissioned from the semi-prominent regional painter.  And next week, when the stress and bickering about the expenese results in you breaking up you'll each have a couple hundred reminders of your time together.

But seriously... doing things on the cheap for the first little while is the best policy.  Realistically the first several dozen copies of anything you make will be either bought by or given away to someone you know and/or are related to.  These people don't care about shrink-wrapping and the brick-wall limiter the engineer used to compress the drum sound.  They like you.  They'd like something more personal that reminds them of you... and they're more likely not to donate it to the library six months later when they are cleaning their living rooms.

(2)  You're in a band that regularly tours but is unsigned and has produced an album to sell at shows.

Even in this case you might not necessarily need to go full production on anything you are dragging from town to town to shill at your merch table.  But assuming you did... other than the handful you offload on the alcohol-elated after each gig... what should you be doing with the rest of your stock?  (a) Compile a database of radio stations that might play independent recordings in the towns you are planning to visit.  (b) Likewise research those towns' local newspapers and send copies (or better CD-R copies) to the staff arts writers with bios, press releases and details of when and where you'll be playing when you arrive.  (c) Though it's a crapshoot whether they will actually get into the hands of someone that will give it the time, you should probably still send them to national publications for possible review.  You never know.

(3)  Other than shows and promos how should you go about selling your recordings?

There are quite a few variables to consider here.  How are things selling off the stage?  Have stores in certain cities been contacting you to find out how to get your recording for their customers?  Even if you're not on a label per se, are you in some sort of collective of groups that form a kind of unified identity?  If you're at the point where you are "buzzing" a little... playing a circuit that takes you to venues/cities more than a couple of times each year... building a nice little folder of press clippings... now is the time where you might have to take those next steps:

(a) Getting someone to handle your distribution.  This could be someone in the band, but even the most organized go-getter (you know the one who remembers to bring his/her instrument to practice and put gas in the van and book the hotel) can get cranky when taking on too much of the business end of things.  Better it be someone you trust who can spare the time to make phone calls and write e-mails all afternoon.  This person will be responsible for:  (b) Getting your records into the right hands.  What we're talking about here is the point where it actually makes sense to put your album in stores rather than just sell them off a website or off the stage... but before the point where you approach actual distributors to take on your business.

Now a lot of bands simply play a town, track down the indie store in that town, drop five or ten copies of the album on consignment and then drive off.  If you'll recall the introductory paragraph of this piece we know how that turns out: bitter indie record store managers putting unsold CDs on a staircase railing to give away.  But... if you have the above mentioned someone to handle your distribution, it should be one of their tasks to keep up a database of what stores have your albums, how many of them they have, what the terms of each place are [i.e. what's been agreed upon for payment, when payments are made, how long they'll keep the albums before putting them on a staircase railing to give away, etc].  If they're especially astute they can also suss out what stores actually have a hope of selling your album vs. the ones that will rack it out of politeness [sidenote: more and more I try to dissuade artists from mailing me their album to sell if they don't have any plans to play Fredericton.  No matter how much "campus radio airplay" or "MySpace friends" or "YouTube hits" a band has, it is exceedingly rare for someone to buy a consignment album by a band they haven't seen play live].  If the city doesn't have an indie store or you aren't sure the local store warrants carrying the album you can always leave contact handbills at the venue you played at, or even the store, that lists where folks can buy the album (or digital download... blah) online.

So now your album is in a bunch of stores across the country.  Now your only job is sitting back and waiting for the money to roll in, right?  Well... no.  In fact it's still your job to: (c) Make sure the records will actually sell, as much as that's within your power to do.  Your trusty distro helper can make regular calls to each seller to see how things are going... not too much or it's badgering and will have a negative result.  But there are a few basic things you can try to give the record a better chance to sell.  City-specific promo posters... make up album release posters that either the band can leave / put up around town with info about availability [e.g. Hammer of Gord's new album "This Van Stinks" is now available at Backstreet Records].  Make sure that the band's website/MySpace/whatever has an up-to-date list of places the album is on sale.  Provide the store with a play copy, posters, stickers and whatever other swag you have kicking around.  The very best case scenario you can hope for is if  the person working at the store actually likes your album... as unlikely as that seems... in which case they will play it, form an opinion about it and maybe even recommend it to their customers.  Stranger things have happened.

Now you've read this and you are thinking to yourselves, "well, of course... that just makes sense," right?  Remarkably this is seldom the case.  The usual scenario seems to be: (1) Form a band (2) Play some shows (3) Borrow a buttload of money to make a recording (4) Give a bunch away to everyone you know (5) Put a bunch more in stores that you never go back to (6) Never mention where people can get them (7) Play a few more shows (8) Get the bills from production / touring / etc.  (9) Break up.  Don't let this be you!!!
Posted by e. at 8:02 PM