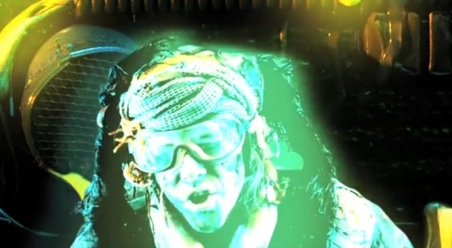 Earlier in the year, we reported that bedroom-pop kingpin Ariel Pink would make a cameo in an episode of "The Multinauts", a new internet sci-fi television series. The first episode of the series, titled "Flashback", features the Pink cameo and is now online. Pink actually plays two characters and gets a significant chunk of camera time in the episode.

"The Multinauts" is an affectionate parody of old zero-budget, amiably ludicrous sci-fi shows like "Doctor Who". It comes soaked in VHS fuzz and packed with knowingly awful special effects. There's also a mohawked, fetish-gear-bedecked villain named Oysters Rockafeller, which should give you some idea of what you're in for here.


Pink plays a glowing sewer mutant, delivering lines like, "The vibes are burning my cortex." He also dons some stupendously ridiculous headgear and performs his song "Flashback" with Haunted Graffiti at an interstellar dance party. I have to commend the band's professionalism; they keep playing even as a bloody lizard-monster attack kills most of the guests at the party. A character on the show calls them a "saga-wave" band, which, as genre descriptors go, isn't bad. As an actor, Pink is about on par with the rest of the show's cast, which means he probably won't step to an Oscar podium anytime soon.

You can watch the full episode below. Be warned: It could be considered NSFW, especially if you work in an office that frowns upon unbelievably fake-looking gore.