by Sean O'Neal May 24, 2010
If you were hoping to see the Limp Bizkit reunion tour this summer, then the person who's reading this article aloud to you is about to say something very upsetting: The rap-metal troubadours have canceled all their upcoming dates out of dissatisfaction with the venues they picked, which are apparently ill-suited for losing your shit in. “Basically, Limp is not an amphitheatre band,” Fred Durst, always the most visionary of Bizkits, mused in between aphorisms on his Twitter feed. “We like to see less seats in front of the stage and more floor filled with fans going bananas. It's just more fun for all of us that way. Some bands are meant to be seen mainly sitting down, but definitely not Limp Bizkit.”
He elaborated further on the band’s official website, saying they hoped to find venues that would allow for more “jumping, dancing, and moshing directly in front of the stage, instead of on a grassy knoll a hundred yards away,” while adding that they also hoped to find a setup where “those of you who want to sit down during our show,” abstain from such terpsichorean delights, and simply drink in the euphonious collusion of melody and yelling about breaking stuff could be sated as well. The band hopes to release its rerouted concert schedule soon. 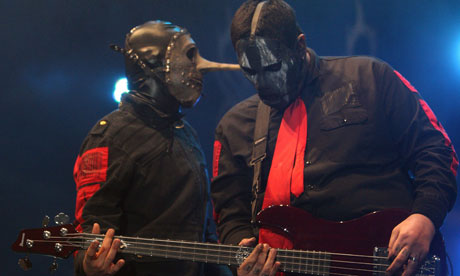 Paul Gray (right), performing with Cris Fehn as Slipknot in Ohio last year. Photograph: Steve C Mitchell/EPA
The bassist of the cult US metal group Slipknot was found dead in a hotel room today, police said.
Paul Gray, 38, was found by a hotel employee at the Town Plaza hotel in Urbandale, a suburb of Des Moines, Iowa. An autopsy is planned for tomorrow. The death is not being treated as suspicious.
Slipknot, recognisable for the grotesque home-made Halloween masks sported by band members, formed in 1995. Gray, who was raised in Des Moines, was one of the band's founding members.
Last year they celebrated the 10-year anniversary of their eponymous first album, which sold more than one million copies. The band won a Grammy in 2006 for best metal performance for Before I Forget, and their 2008 album All Hope is Gone topped the US album chart.
Prior to his death, Gray had been working on an album with Hail!, a metal supergroup featuring past or present members of Judas Priest and Sepultura.
Tributes to Gray were paid by Slipknot fans, known as maggots, on social networking sites.
On Gray's Facebook page, Matt Wagner quoted the band's single Left Behind: "As I close my eyes. I feel it all slipping away. We all got left behind. We let it all slip away. Rest in Peace Paul Gray."
Aanshikseth tweeted: "The only bass player Slipknot ever had. R.I.P Paul Gray. Tragic."
In 2003, Gray was arrested on drugs and drink-driving charges after the car he was driving crashed into another vehicle when he went through a red light.
He was arrested for possession of marijuana, cocaine and drug paraphernalia, as well as drink-driving. The incident led to Gray's mugshot being leaked to a website, causing a stir among fans as, at the time, most of the group had avoided being photographed without their masks.
Posted by e. at 8:26 PM